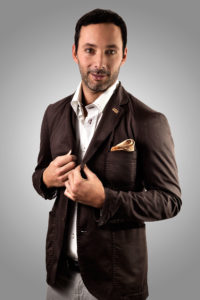 Emiliano Reali is an Italian writer and journalist. He graduated in History of Religions and made his debut when he entered his very first story in a national contest, held by the Holden School of Turin, and won. In 2009, he achieved success with his novel “Se Bambi fosse trans?” (What if Bambi were a trans?). Some of his works are recognized as having a high-cultural value and are used in elementary and high schools. In 2011 his fantasy novel Il seme della speranza (The Seed of Hope) was published, a story about today’s society, which focused on the effects of greed for power and money in today’s society. In 2012, The City of Rome sponsored the event celebrating his book release  “Sul ciglio del dirupo”. It was widely reviewed in the national press and presented on numerous radio and television channels. In 2013, a new and entirely rewritten version of Ordinary was published. It was the first AR-Book (augmented reality) in Italy, and in February 2014 a cartoon version, Ordinary graphic novel, was also published. In December 2014 a bilingual version (Italian facing English) of “Sul ciglio del dirupo” was published for the American market with the title “On the Edge“. Reali presented the book at NY University and the Italian Cultural Institute at the Italian Embassy in Washington.
Reali also writes for the screen and he is a scriptwriter. Meridiano Zero, of the Odoya Group, republished “Se Bambi fosse trans?” in a new edition in 2015 and also published simultaneously its sequel “Maschio o femmina?” (Male or female?) and in 2017 published the third book closing the Bambi trilogy “Ad ogni costo” (At any cost). In 2020 (Watson) and 2021 (Scatole Parlanti) were published two new editions of Il seme della speranza (The Seed of Hope) and the novel was used in several schools like reading text. In 2021 What if Bambi were a trans? was published for the Spanish market in Spain and Mexico and in 2022 Avagliano published Bambi. History of a metamorphosis. Emiliano Reali keeps the column Nel giardino delle parole (In the garden of words) on the Huffington Post (Italian edition), where he recounted books, and he collaborates with the Italian daily newspapers Il Riformista and Il Mattino.